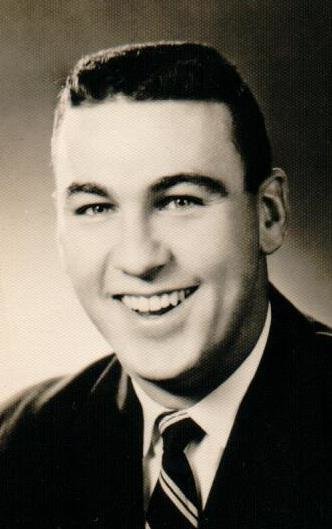 Dick was born April 1, 1935 in Troupsburg, NY, the son of Darius “Dee” and Mary “Mamie” (Tonkery) Hober.  Dick grew up in the Wayland area and remained a lifelong resident. He graduated from Wayland Central School in 1952 and was a 1956 graduate of Bucknell University, earning a Bachelor’s Degree in Economics.  While at Bucknell, Dick played football and baseball and was a member of Theta Chi Fraternity.  He was also a member of ROTC and remained actively involved in the US Army Reserves for many years, earning the rank of Captain.

Dick and Elizabeth “Betty” Gormel were married August 11, 1956 at Holy Angels Roman Catholic Church in Nunda, NY. They recently celebrated 63 years of marriage. Dick’s career spanned a few different areas. He began as a sales representative for Prudential Insurance Company. After a few years, he started Hober’s Tire Service and Excavation with his father. Eventually, Dick became the owner and operator of the family business and managed it until his retirement.  One of his achievements was to build the Wayland-Cohocton Varsity Baseball field, which was a benchmark for many other school fields in the area.  In 1996, Dick was elected Town of Wayland Highway Superintendent and remained in that position for 8 years.  With his sons, Dick also maintained a Christmas tree farm, which his family will continue to operate.  He learned to make evergreen wreaths when he was young and his skills were unmatched!

Dick’s hobbies were many, but he mostly enjoyed the outdoors and was an avid fisherman and hunter. As a result of his skills in turkey calling and hunting, he became friends with Neil Cost, the editor of Turkey Call Magazine, and enjoyed many successful hunts with him.  During deer hunting season, he was affectionately known by his hunting comrades as “The General!”  This group, which included family and friends, was very successful throughout the years.

Dick’s family and friends are invited to celebrate a Mass of Christian Burial on Saturday October 12, 2019 at 11am at St. Joseph’s Church, 206 Fremont St., Wayland, NY.  Committal prayers and interment will take place immediately following at St. Joseph’s Cemetery in Wayland.  Contributions in memory of Richard T. Hober may be made to the Vincent House, 310 Second Ave., Wayland, NY 14572.