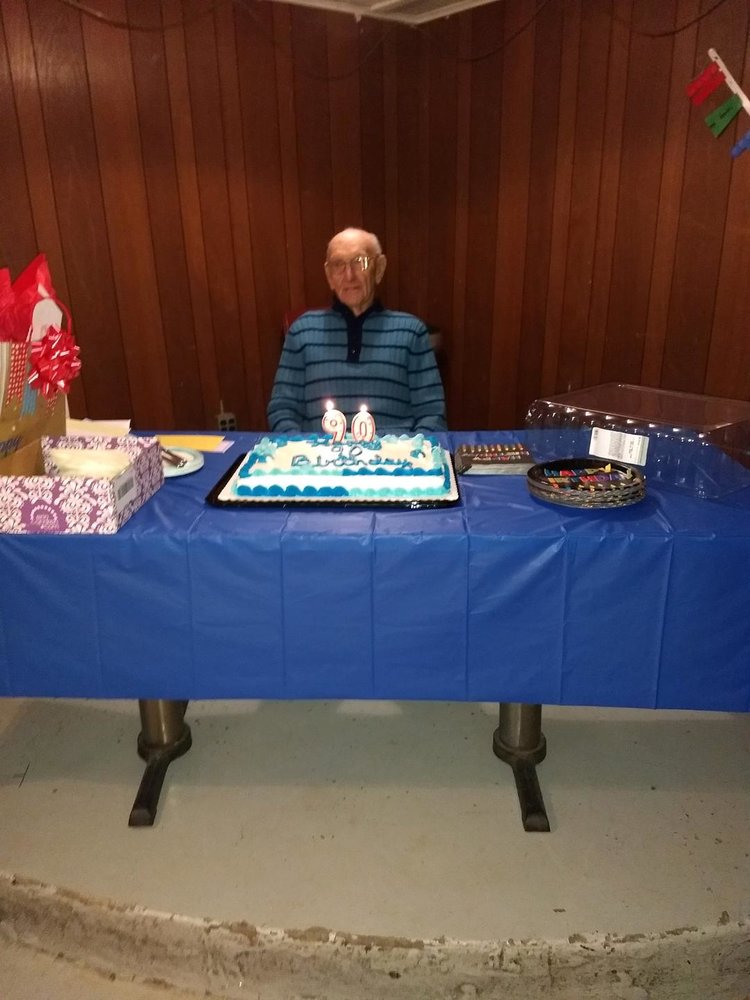 Please share a memory of Frederick to include in a keepsake book for family and friends.
View Tribute Book
Wayland – Frederick J. “Junior” Schubmehl, 91 years of age, passed away Monday morning, August 31, 2020 at his home. Fred was born November 13, 1928 in Wayland the son of Fred and Dorenna (Jacobs) Schubmehl. He grew up in Wayland and has remained there his entire life. Junior worked at several different jobs during his lifetime; The Cannery in Wayland, drove delivery truck for Sammy Johnson Bottle Gas, the Railroad, and he retired after 25 years of service from Syracuse Supply, located on Manufacturer’s Boulevard in Henrietta. He was a specialist worker in the track room where he repaired the big tracks found on large construction equipment. They dealt a lot with Caterpillar products (out of Peoria, IL) which was a machine dealer of Syracuse Supply. Junior married Arlene Shetler on November 27, 1947. They were married 53 ½ years and they both celebrated their 50th wedding anniversary in 1997 with a party at the Wayland American Legion; celebrating with family and friends and hosted by their children, Terry and Cathy. Fred enjoyed hunting deer, rabbits and turkey. He was well known at the Hober homestead, helping to cook during hunting season. He had been a longtime friend of Dick Hober and was deeply saddened by his passing. He continued to work after retirement at Hober’s helping with plowing and driving truck assisting the boys with their paving business. He also helped with making Christmas wreaths and selling Christmas trees during the holiday season along with assisting with the production of homemade wine and sauerkraut. During his younger years, he loved playing baseball for both the Wayland and Cohocton town teams. He also was a member of St. Joseph’s Church where he would help take up the collection. Junior was always busy doing something and was never one to stay idle. He will be dearly missed by all his family and friends. Fred was pre-deceased by his parents, Fred and Dorenna Schubmehl; his wife Arlene Schubmehl; his older brother Robert Schubmehl; his sister-in-law, Marlene Schubmehl; his brother-in-law, Earl Brunswick; and his son-in-law, Richard (Dick) Spencer. He is survived by his children, Cathy Spencer of Wayland and Terry (Cathy) Schubmehl of Wayland; his grandsons, Kurt of Wayland, Corey (Sarah Gervell) of Naples, Jason Spencer and Nicholas Spencer both of Wayland and Adam Schubmehl of Springwater; -his great-grandchildren, Matthew (Nicole) Spencer of CA, Joseph Spencer of FL, Olivia Spencer of Wayland and Charlie Spencer of Wayland; his great-great-grandsons, Logan and Kolton of CA; his siblings, Richard (Ann) Schubmehl of Wayland, Ronald Schubmehl of Rochester and Genie Brunswick of N. Cohocton; his sister-in-law, Pat Schubmehl of Waland; along with several nieces and nephews. Junior’s immediate and extended family will attend a private viewing and calling hours. The immediate family will be available for friends to call, Thursday September 3, 2020 from 5-7pm at St. George-Forsythe Funeral Home, 109 West Naples St., Wayland. Facial covering, social distance and no physical contact with funeral home patrons policy will be in effect. A private Mass of Christian Burial will be celebrated for Junior at St. Joseph’s Church in Wayland. Committal prayers and interment will take place at St. Joseph’s Cemetery in Wayland. Contributions in memory of Fred “Junior” Schubmehl may be made to the Vincent House, 310 Second Ave., Wayland, NY 14572.

Thursday September 3, 2020 ~ 5-7pm ~ Face covering, social distance and no physical contact policies will be in effect.

Share Your Memory of
Frederick
Upload Your Memory View All Memories
Be the first to upload a memory!
Share A Memory
Send Flowers
Plant a Tree