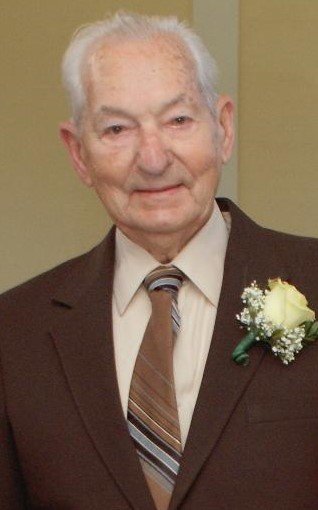 Please share a memory of William to include in a keepsake book for family and friends.
View Tribute Book
Springwater – William J. Renno, 98 years of age, passed away Friday evening, September 25, 2020 at his home. Bill was born September 9, 1922 in Chili the son of William A. and Eunice Mae (Coulter) Renno. He grew up in the Greece and moved to the Springwater / Wayland areas in the late 1970’s and has remained there ever since. Bill was a World War II Veteran serving his country from November 27, 1942 until his honorable discharge January 5 of 1946. Bill and Dorothy Eggert were married September 21, 1943 and celebrated over 39 years together prior to her passing away January 13, 1983. Bill and Colleen Corcoran were married February 27, 1984 and together have celebrated over 36 years together. Bill’s employment career was mostly spent as a route salesman for Wonder Bread. His hobbies were many. Bill enjoyed his “little garden farm”; loved camping in Florida; and especially took pleasure in fixing just about anything and helping others! Bill was pre-deceased by his parents; his first wife, Dorothy; a daughter, Susan Roach; a son Rick Renno; and a grandson, Mike Renno. He is survived by his wife, Colleen Renno of Springwater; his children, William “Skip” (Patricia) Renno of Avon, Douglas Renno of Amsterdam and Dennis (Marjorie) Renno of Windsor, CT; several grandchildren and great-grandchildren; his sister Mary Ellen Kennett of Deerfield Beach, FL; his niece, Cindy; plus many wonderful friends. Bill’s funeral service will be at the convenience of his family. A request from Bill’s family in lieu of flowers and contributions – Say “Thank you!” to a veteran for their service to our country. It always brought a smile to his face when this happened to him.

A Memorial Tree was planted for William
We are deeply sorry for your loss ~ the staff at St. George Stanton Funeral Home
Join in honoring their life - plant a memorial tree
Online Memory & Photo Sharing Event
Online Event
About this Event