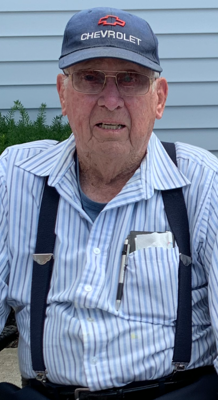 Please share a memory of Donald to include in a keepsake book for family and friends.
View Tribute Book
Wayland – Donald E. Ellis, 91 years of age, passed away early Friday evening, October 30, 2020 at his home in Wayland. Don was born July 24, 1929 in York the son of Arthur C. and Helen (Dillon) Ellis. He grew up in York and has also resided in Perry, Dansville, Springwater and settled in Wayland in 1959. Don and Lucille F. Recktenwald were married July 3rd, 1954 and together have celebrated over 66 years of marriage. His employment career has spanned a few different areas throughout his life. He worked at Maloney’s Nursery and Kelley Brothers Nursery; was a truck driver for Bill Dillon Trucking in York; and worked for the Town of Wayland Highway Department for 20 years, retiring in 1985 Don was a “Jack of all trades!” He could fix just about anything and often could be heard saying, “I can fix that.” His favorite pastime though was mowing lawns. Don was a perfectionist and would often mow his family or friends lawns so they were done right! He was a member of the NCA Club of North Cohocton and the Perkinsville Fire Department. Don was pre-deceased by his parents, Arthur and Helen Ellis; his five brothers and two sisters. He is survived by his wife, Lucille Ellis of Wayland; his children, Bonnie (Lawrence) Kirkum of Wayland, Donna (Mike) Parks of Wayland, Gary (Barb) Ellis of Springwater, Shirley (Jim) VanDerMeid of Wayland, Donald (Ellen) Ellis of Wayland, Cameron Ellis of Wayland and Stacy Page (Joe Marmo) of Rochester; 12 grandchildren; 11 great-grandchildren; his brother in law Eugene Recktenwald of Wayland; along with several nieces and nephews. Don’s family will have private calling hours and funeral service at St. George-Forsythe Funeral Home, 109 West Naples St., Wayland. Committal prayers and interment will take place at St. Joseph’s Cemetery in Wayland. Contributions in memory of Donald E. Ellis may be made to the Vincent House, 310 Second Ave., Wayland, NY 14572 or to the Alzheimer’s Association, 225 North Michigan Ave., Floor 17, Chicago, IL 60601.

Don's funeral services were held privately for his family on Tuesday November 3, 2020 at the funeral home.