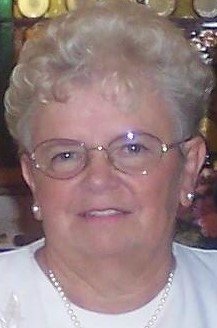 Obituary of Lorna A. Eddy

Please share a memory of Lorna to include in a keepsake book for family and friends.
View Tribute Book
Springwater/Wayland – Lorna A. Eddy, 79 years of age, passed away Friday morning, November 27, 2020 at Schofield Nursing Home in Kenmore. Lorna was born April 21, 1941 in Conesus the daughter of Burton and Mary (Holmes) Perkins. She grew up in Springwater and was a resident there most of her life. Lorna moved to Wayland in 2004 upon marrying Larry Eddy May 1, 2004. Larry passed away in 2017 and Lorna moved to the Buffalo area to be closer to her daughter. Her employment career was mostly spent as the manager at Steve’s Red-n-White Grocery store in Springwater. Lorna’s hobbies were many as she enjoyed all types of crafts that included; crocheting, sewing, quilting and ceramics. She also enjoyed playing golf, cards, bowling, and watching soccer, whether it was live or on television. However of special joy to Lorna was taking care of her son Jerry for most of their life together. Some would say Jerry was actually taking care of her! Years ago, Lorna was also a member of the Springwater United Methodist Church and the Springwater Fire Auxiliary. Lorna was pre-deceased by her parents, Burton and Mary Perkins; Justin “Sonny” Coates; her daughter Susan Sweet; her son, Jason Coates; her husband, Larry Eddy; and siblings, Robert Perkins, Neil Perkins, Ernest Perkins and Alan Perkins. Lorna is survived by her children, David (Mary) Coates of Springwater, Gerald Coates of Lima and Jennifer (James) Schultz of Newfane; her daughter-in-law, Ameigh Coates of Arkport; her step-daughters Sheryl (Keith) Pragle of Cohocton and Chris Cooley (Don Schrader) of NC; her grandchildren, Cheyanne, James Jr., Christine, Michele, Kyle, Alexandra, and Thomas; her great-grandchildren, Lorna Sue and Jason Michael; her step grandchildren, Robert, Brett (Danielle), Michael, Kerrin (Michael), and Devin (Caroline); her siblings, Lawrence (Linda) Perkins of Canandaigua and Kenneth (Robin) Perkins of Gorham; her sisters in law, Rose Perkins of Springwater and Dusty Perkins of TX; along with several nieces and nephews. Lorna’s family and friends may call Friday December 4, 2020 from 4-7pm at the St. George-Forsythe Funeral Home, 109 West Naples St., Wayland. Social distancing, facial covering, and no contact policies will be in effect and enforced at the funeral home. Lorna’s funeral service will be private for her family along with interment at Oak Ridge Cemetery in Livonia Center. Contributions in memory of Lorna A. Eddy may be made to Brain Aneuryism Foundation, www.give.bafound.org.

Share Your Memory of
Lorna
Upload Your Memory View All Memories
Be the first to upload a memory!
Share A Memory
Send Flowers
Plant a Tree