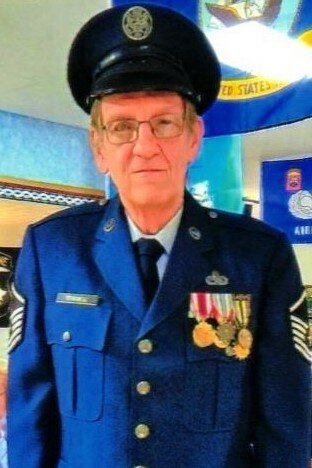 Please share a memory of Kevin to include in a keepsake book for family and friends.
View Tribute Book
Dansville – Kevin W. Perkowski, 71 years of age, passed away Saturday March 26, 2022 at Noyes Memorial Hospital in Dansville. Kevin was born January 3, 1951 in Huntington, NY the son of Edward S. Sr. and Helen (Michalowski) Perkowski. He grew up in Wayland and was a graduate of Wayland Central School. Kevin served his country in the United States Air Force for 24 years; September 20, 1971 until his retirement and honorable discharge September 30, 1995. During his service, Kevin and his family resided in Germany, Okinawa, Illinois, California and Florida. While in the Air Force, Kevin was an aircraft technician. Upon his retirement from the Air Force, Kevin moved to Dansville and began a 16-year career with Frontier Telephone, retiring in 2011. Kevin and Linda Reis were married August 1, 2009 and have enjoyed 12 years together. Kevin enjoyed gardening (and canning what he grew), writing (he dabbled with writing a book), science fiction (a big fan of Star Trek), airshows and camping. Kevin loved tinkering with anything mechanical; especially taking something apart and putting it back together just because he could! Kevin enjoyed life membership in the Dansville VFW and the Wayland American Legion, along with membership in the Dansville Moose Club. Kevin was pre-deceased by his parents, Edward Sr. and Helen Perkowski; his brother Edward Jr. “Butch” Perkowski; his brother-in-law James “Mac” McDonald and his first wife, Caroline Edgecomb. He is survived by his wife, Linda Reis Perkowski of Dansville; his daughters, Tonya Perkowski of Victor and Carrie (Gary) Minsavage of NJ; his grandchildren, Audrey and Lila; his siblings, Vincent Perkowski of Avoca, Stanley (Mary) Perkowski of Wayland and Ann Marie McDonald of Perkinsville; his sister-in-law, Judy Perkowski of Wayland; Linda’s children, Kina (Rhashe) Jackson of Niagara Falls and Tina Mott of Niagara Falls; Linda’s grandchildren, Danny, Devin, Korina, Kinasia and Romiah; along with many nieces and nephews. Kevin’s family and friends may call Thursday March 31, 2022 from 4-7pm at St. George-Forsythe Funeral Home, 109 West Naples St., Wayland. A Mass of Christian Burial will be celebrated for Kevin on Friday April 1, 2022 at 10am at St. Joseph’s Church in Wayland. Military honors, committal prayers and interment will take place immediately following at St. Joseph’s Cemetery in Wayland. Contributions in memory of Kevin W. Perkowski may be made to the Dansville VFW, 145 Main St., Dansville, NY 14437 or to the American Red Cross, PO Box 37839, Boone, IA 50037-0839.

Share Your Memory of
Kevin
Upload Your Memory View All Memories
Be the first to upload a memory!
Share A Memory
Send Flowers
Plant a Tree