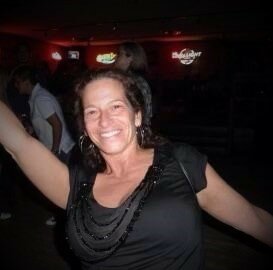 Please share a memory of Janet to include in a keepsake book for family and friends.
View Tribute Book
New Jersey – Janet L. Mohr, 64 years of age, passed away early Wednesday morning December 14, 2022 at the home of her daughter in Wayland. Janet was born March 14, 1958 in Perth Amboy, NJ the daughter of George and Janice (Hilbert) Trevena. She grew up in New Jersey and was a graduate of Lakewood High School. Janet remained a life resident of New Jersey until a month ago when she moved to Wayland to be with her daughter. She worked for Shop-Rite as a retail manager for many years, retiring just a short time ago. Janet was a fighter from day one! Her sense of humor was second to no one. She was just a happy person; always in a good mood. Janet loved to dance, enjoyed camping painting, anything crafty and she had an awesome green thumb. Most important to her though was her family! She will be dearly missed by all. Janet was predeceased by her parents, George and Janice Trevena. She is survived by her daughter, Jenn Mohr (Jake Smith) of Wayland; her grandchildren, Brandon DeGuarde, Patience Smith, Elliot Smith and Berlin Smith; her special niece and nephew that were like grandchildren, Lauren and Kyle Trevena; her siblings, Carol Trevena of FL, Nancy (James) Royle of NJ, Shirley Trevena of FL, Georgette (Chris) LoCicero of NJ and George “Jr” (Nicole) Trevena of NJ; along with many nieces and nephews. Janet’s funeral service will be private and at the convenience of her family.

A Memorial Tree was planted for Janet
We are deeply sorry for your loss ~ the staff at St. George Stanton Funeral Home
Join in honoring their life - plant a memorial tree
Online Memory & Photo Sharing Event
Online Event
About this Event

Share Your Memory of
Janet
Upload Your Memory View All Memories
Be the first to upload a memory!
Share A Memory
Send Flowers
Plant a Tree